The port as the good neighbour
We want to be your good neighbour - if you feel we're not, we want to hear from you. We want to know what you've experienced and when, so we can use that to improve our service.

We make a great effort to be a good neighbour to the many people who are active in sailing or otherwise live or move close to the commercial port. Part of this effort is to plan the daily work at the port so that it disturbs the neighbours as little as possible, especially with dust and noise. 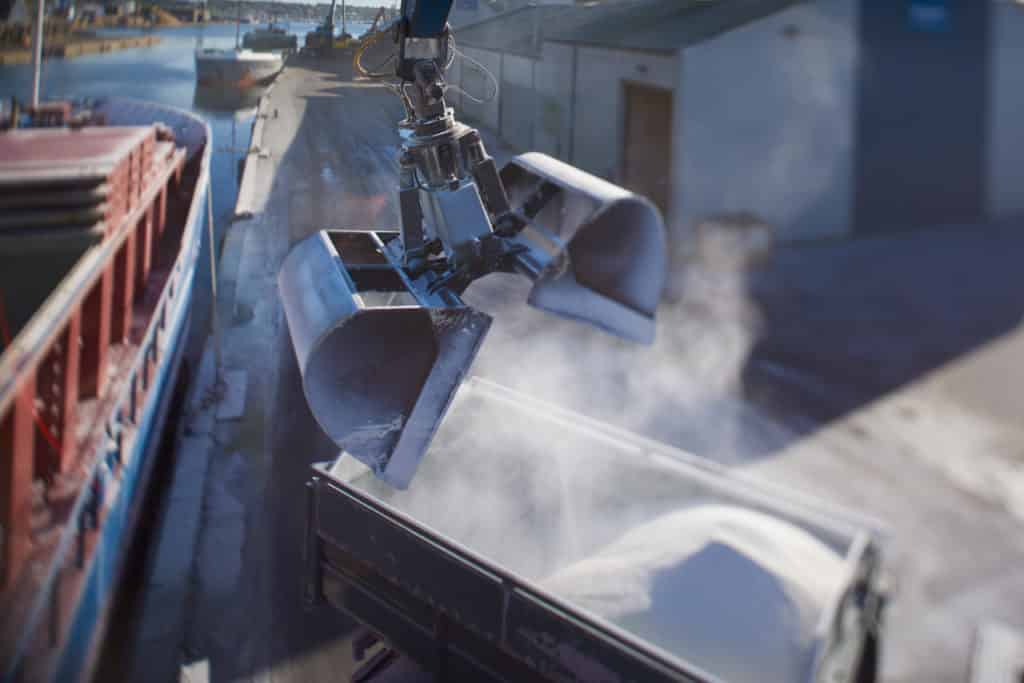 A good neighbourly relationship - contact us if you experience anything else

We spend a lot of resources on processes, equipment, training and techniques - we have repeatedly tightened and optimised internal procedures to mitigate dust and noise pollution that could be a nuisance to our neighbours. We handle over 100,000 tonnes of cargo every month and we naturally want to be the "good neighbour", for example to prevent dust from getting outside our own premises.

If you experience a situation that causes you major inconvenience, it's important that we're notified immediately while the situation is still present - so we can take action as soon as possible and further optimise our processes.

We thank you in advance for your efforts and yours to maintain good neighbourly relations, which we encourage you to foster in the common interest.

By filling out the form below, you agree that Kolding Havn stores this data about you. We follow the GDPR rules for storage and deletion of data.

Recycling metal handling will be moved into the middle of the port with new shielding, greatly reducing the noise level traditionally associated with iron and metal handling.

There are three noise sources in particular that we aim to limit - even if the port already meets the environmental requirements imposed on the Port of Kolding by legislation. See our operating hours and noise sources below:

Handling of dusty bulk cargo - e.g. grain, biomass and fertilizer - must not be done in a way that causes dust pollution outside the Port of Kolding's areas - i.e. outside the ISPS fence. We handle approximately 1 million tonnes of bulk cargo annually and we are continuously investing in new, modern and updated terminal equipment, as well as all operators strive to minimise dust development and limit it to the port's own areas.

There will be regular dusting inside the port itself, but the aim is to keep it dust-free outside the fence. To minimise dust generation, restrictions have been placed on the handling of bulk dust. Therefore, no dusty bulk may be loaded or unloaded at wind speeds exceeding 6 metres per second. If - despite the efforts of the port and port companies - dust still occurs outside the port, we would like to hear from you.

An environmental officer from the Port of Kolding will then contact you immediately and inspect the area where the dust has fallen. Dust samples will often also be collected for further analysis by Force Technology, who carry out independent laboratory tests. It is crucial that we get clarity on the types of goods that may be dusting outside the fence so that we can take action, stop the dust generation and prevent the situation from recurring.

The companies at the Port of Kolding, such as feed factories and the port's bitumen plant, have been working intensively for a number of years to reduce any odour nuisance - even if we comply with all environmental requirements. The prerequisite for effective action against odour problems in the environment is to avoid uncontrolled emissions of process air. Tank farms and feed mills therefore have extensive ventilation systems in which room and process air is collected, directed for treatment in odour purifiers, and then discharged through high stacks to ensure adequate dilution. Our biggest challenge in terms of odour is undoubtedly the port's handling of fishmeal. Therefore, fishmeal with small flour granules that create dust during unloading and handling is no longer imported, but instead coarse-grained fishmeal - i.e. fishmeal with large granules. This significantly reduces dust generation and any odour nuisance. At the same time, we have chosen to limit the number of cargo ships carrying fishmeal to a few, but relatively large, cargo ships. This significantly limits the number of days with possible odour problems to less than 15 days per year - the Port of Kolding is open for port business 365 days per year.

We are working to limit the number of trucks on Jens Holm Road, especially during rush hour. In relation to trucks and rail cars, we have introduced access restrictions to and from the Port of Kolding between 7:30 and 8:30 on all weekdays. So the next time you hear on the traffic radio that there is a queue past the Port of Kolding, it is probably not because of heavy traffic in and out of the port.

Do you want to keep up to date with the Port of Kolding?

See an overview of our website here - with links to all areas. Please contact us if we can help with clarification or more information.

Menu
We use cookies to improve your experience. By confirming, you agree to our use of all cookies.
Read moreAccepter
Manage consent

The Port of Kolding uses cookies to improve your experience on the website. Some of these cookies are necessary for a website to work and are stored in the browser. We also use other cookies to analyse and understand how you use our site. These are only enabled with your consent. Therefore, you can also always opt out of these cookies, even though it may have an effect on your experience.
Needed Altid aktiveret
Cookies needed for a website to work properly. These cookies do not store any personal information.
Not needed
Any cookie that is not needed for a website to work as intended. Including Google Analytics, Facebook Pixel and other embedded content.
GEM & ACCEPTÈR